A Novice Perspective Of Cycle Touring

When asked last November if I would like to do a two-week cycle tour this summer across France I was initially taken by surprise. I was not sure if I had the ability and certainly not the equipment for this sort of adventure. A fellow cyclist offered to lend me the touring equipment needed including a tent. This only left me to work on a suitable touring bike and build up my fitness. I also felt I needed to be more appreciative on how my bike worked. I attended classes organized by The Evesham Wheelers and later I had an evening at Echelon where we took in our own bikes to work on basic maintenance. Being involved in mechanical issues on club rides also helped my awareness of common pitfalls.

Initially we talked about putting bikes in boxes and flying, the alternative was at least 24hrs on a bus. However flying created issues such as what to do with the boxes on arrival and how easy was it to put the bike together. After a short while, The European Bike Bus was chosen one way from Northampton to Lourdes.

We would sail back overnight from Caen to Portsmouth.

I realized that hills were to be my main challenge so I started to lengthen my Wednesday club rides sometimes to include an extra hill on the way home. After Christmas I started going out on a Friday with the Ebrington Group which was a much more challenging ride with more hills and a faster pace. I tried not to be always at the back and usually managed to tuck into the center of the group, my lack of fitness usually coming to light on the longer hills.

I had no idea if I had the ability to do back to back cycling of about 60 miles each day and also how I would manage the camping having not put up a tent since my Girl Guide days. Just as I was feeling it might be possible Martin decided we might like to consider tackling The Tourmalet as it was to be featured in this year’s Tour de France. The obvious time for this would be before we started our cycle tour while staying close to Lourdes. 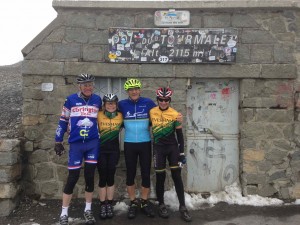 Steve Brooker lent me a journal he had written of one of his cycle tours that included a very detailed list of all his kit and equipment. This I found invaluable. I tried to keep my luggage to a minimum but still ended up with 7kg in each back pannier, a further 2kg in my front bar bag. My tent and foam mattress positioned on the back rack between the panniers weighed 2 Kg.

So what bike to take on a touring trip? Numerous options were suggested.

In the end I went for a Titanium Van Nicholas Yukon with triple crank set which would also double up as a proper winter bike and useful for Audax rides.

Here is an outline of our final   route. We covered 950 miles in just over 2 weeks allowing for a day on the bike bus and a day climbing the Tourmalet.

The camping was great. Most towns usually had a choice of sites. Roy made sure through good planning there were suitable campsites on the chosen route. It was quite early in the season and a few of the sites were not open yet luckily we only got caught out once. Camping also gave us the flexibility to change the route as we went along and it was very inexpensive, most sites costing around 20 euro for the four of us.

The cycling was rewarding though there were perhaps a few too many hills at the beginning when it would take us most of the day to do 50-60 miles. The difficulty was also getting enough food at the right time as the majority of towns shut down for several hours in the early afternoon. My appetite more than doubled within a few days of starting the tour and a half pint of beer quickly changed to a pint after a full day of cycling We ate out most nights but did a couple of takeaways when we were late getting into camp and cooked once when we were allowed to take over the café in the camp site which had not yet opened for the season.

As a group of four we worked really well together. 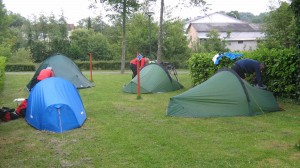 Dave was our project manager and he made sure we were organized in the morning and ready to get away at a reasonable time. He was also our campsite navigator picking up local maps and usually putting us in the right direction for evening meal possibilities, and importantly supermarkets and or patisserie for breakfast the next day. He was our scout on the hill climbs as he usually left us behind reaching the top well in advance. 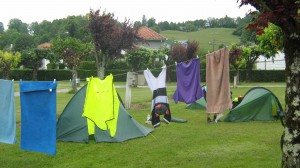 Roy was our chief navigator with his Garmin. He also made sure we had frequent stops for food to include a variety of magnificent pastries. Roy and Martin were keen to organize the camp washing lines on arrival and it was always a race to locate any suitable charging plugs. I did draw a line at having washing draping off the back of the bikes when we were travelling even if it was a good way of getting it dry!

Martin was back up navigator with a series of large-scale French maps he picked up at a charity shop. He was our chief mechanic. He sorted out my rear puncture on the second day when I went into a pothole on a difficult ascent. He also sorted out a loose spoke and detached nipple in Roy’s rear wheel. Dave developed a clunking bottom bracket. A bit of oil soaked in overnight and peddling in not such a big gear seemed to solve the problem. Martin had a few problems with his “granny ring”. I was not sure he ever completely sorted it.

Martin was also very proficient at taking photographs even whilst cycling. I found it hard to use my water bottle let alone try and take photos.

I was the chief physician. Luckily having taken a fairly extensive supply of pills none were needed. I was also quite organized with the IT. Having a dongle for mobile Internet it allowed us to use Google Maps when both the Garmin and conventional maps had not quite located our position and planned route.

The hardest part of the trip was the ride home from Portsmouth, 120 hilly miles!

In one day with panniers! This was not helped by heavy rain to start, regular stops and yet more calorific food allowed us to get back just as it was getting dark.

So would I do it again? The answer is certainly yes!

It was a wonderful way to see the countryside, take in the atmosphere of the towns and villages and of course the food. You can eat as much as you want and not worry about putting on any weight! 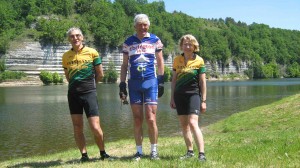 The cycling was challenging sometimes tipping into endurance but it gave me an amazing sense of achievement.

The camping was good fun. By the end of two weeks I was much more proficient at putting the tent up and down and packing up the bike.

I have all the pictures but somehow it seems unreal and a long time ago as I now get back to normal routine. I am much fitter and my cycling has definitely improved.

I am also thinking about the next one!!