Carol Hall, our President, once again organised everything, and everyone, to ensure the ever-growing group of Wednesday riders enjoyed a really excellent Christmas Lunch at the Round of Grass in Badsey on Wednesday 17th December. A group of 27 riders set out at the usual time and stopped off at The Pudding Club in Mickleton for festive coffee and biscuits; then they went on to Badsey where another 10 Club members or their partners joined them for lunch. Great company and good food. Thanks to Carol for the organisation – without which we would not have had a Club Christmas.

It was good to see Tony Canning back in his wheelers shirt after a long lay-off due to medical problems; also John Troman now back to ‘almost’ full fitness and the everlasting Bill Smith who still rides out regularly to the coffee stop. Get well soon to Pete ???? , another veteran who itches to get back on his bike but was having a pacemaker fitted whilst he would otherwise have joined us. 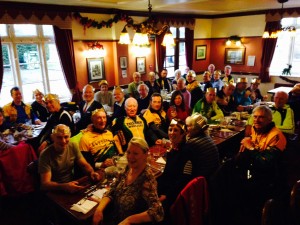