Neville, as most of you will know, was the long standing President of Evesham and District Wheelers CC, having rightly continued in that post for longer than his predecessors.

He was born in Croydon in 1935 and early in his life, whilst still at grammar school, began his first athletic career, that of a long distance runner specialising in cross country events, a talent that saw him become a prominent member of the South London Harriers, running for county until his knee became a problem, then seeing the light and becoming interested in cycling, again the long distance version of the sport.  He soon became a member of the C.T.C. (Reigate section, then Croydon section – becoming Vice-President) and started longer tours during weekends and holidays to Europe and it was at the start of one of these that he first came across Anton Newell who subsequently became a member and President of the Wheelers.

Neville’s career as a food technologist saw him employed by Horlicks, where it is said he learnt to sleep well, then on to Smedleys, the canners who had a plant in Evesham and finally on to Walls Ice Cream.  When Walls relocated to Gloucester in the 1970’s, Neville moved with them and bought his bungalow at Butterrow on the outskirts of Stroud in 1976, living there until his death.  Through his friendship with Anton, he was introduced to club cycling with the Wheelers, the only club that he joined apart from national organisations.  Amongst those other bodies were Audax U.K., the Y.H.A. and that very exclusive body, the 300,000 mile Club.

In tandem with his growing cycling exploits, Neville became an accomplished photographer so his camera was always at hand during his frequent forays to foreign lands which by now had included most of the European countries.  Thus began yet another career, that of a producer of professionally compiled slide shows of his tours given to clubs and organisations throughout the country.  Many of these were given to members of the Wheelers when we had social events in the Club.

Despite living so far away, Neville became Treasurer of the club and managed our finances for many years, regularly attending committee and other meetings while spending an increasing amount of time abroad.  Over the years, he toured within 5 Continents and the Indian sub continent and there seemed to be no country where his smiling countenance and faithful Allin had not been seen, except for those areas which were cold and wet, two of his pet hates.

We were all pleased when Neville agreed to become our President on relinquishing the Treasurer’s post and he proved to be the greatest ambassador for our Club, he and his Club jersey being seen all over the world.  Despite his extensive travels, he never failed to attend Wheelers’ promotions and meetings when he was in the country and was a true and loyal supporter of the Club.

His mileage on the bike was truly amazing: he faithfully recorded every mile covered from soon after he took up the sport and had amassed over 643,000 miles during his lifetime.  He was known throughout Europe, especially in his beloved France, where he was on first name terms with the Tour de France organisers as well as those responsible for Audax rides.  He visited the Tour on over 50 occasions as well as the Giro and the Vuelta and many of the one day classics.  He took part in every Dieppe Raid since the event began nearly 40 years ago and was very pleased and proud when a large party from the Club joined him on this a couple of years ago.  He was also well known on the Newhaven/Dieppe ferry service, having travelled on that route over 100 times!

Neville was a bachelor but had many lady friends, sometimes known as his “nieces”, and he was a superb “chatter-up” of the fair sex.  He was a gentleman in every sense of the word, a fascinating character and a great and loyal friend: it was a privilege to have known him and all of this was reflected in the large turnout at his funeral service at Gloucester where his bike was placed next to the coffin.  Your Club was well represented by members past and present who were saddened by Neville’s passing but relieved in a way at the manner of his death, in his sleep after returning from yet another adventure in France.

Provided on behalf of the Members of Evesham and District Wheelers CC. 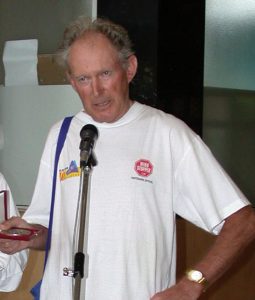 Neville Chanin receiving an award at the 2009 Dieppe Raid. Neville organised the first Dieppe Raid weekend in 1972. A real character who is greatly missed.