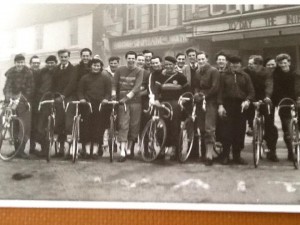 In the late 1940’s and through the 1950’s cycling was one of the few affordable entertainments for most people. The economy was in a very poor state for many years following the 2nd World War.

In 1947, above a cycle shop in Port Street, a small group of young riders agreed Evesham and District Wheelers Cycling Club should be formed. The shop belonged to Bert Godwin who became the first President of the Club. Gordon Taylor, then his 15 year-old assistant, but later the manager of the shop, was one of the young founding members.

Bert Godwin is long gone, and Gordon passed away in 2014.

The members took to the roads on their steel road bikes and woollen clothes with enthusiasm. The all-day, 120 mile, Sunday run used to meet up with the shorter (70 mile) Sunday afternoon run at a tea stop: returning together at 7 or 8pm.

Soon Club time-trials were started and cycle touring forays by smaller groups were regular occurrences. With the help of generous Dads the Club acquired the tenancy of an old slaughterhouse in Cowl Street. This, after re-plastering and decorating, became the Clubhouse which led to a strong social element to all activities, something that was maintained for many years.

Time-trial races were very hotly contested from the outset. The competition for trophies was hard fought with the Best All Rounder cup going to the best time for 10, 15, 25 and 50 mile races. Gordon Taylor was winner for 7 years in a row on the shorter distances. Later the distances were upped to 25, 50 and 100 miles.

When the Club was only 3 years old John Percival joined. He too was a young lad at the time and although he has been out of action for most of the past couple of years we hope he will again soon be a regular Wednesday and Sunday rider.

The breadth of the Clubs activities was wide; regular Club runs, time-trials, track racing, grass-track racing, massed start racing, touring and an annual Easter riding trip to the Isle of Wight. The social side of the Club was also booming – which inevitably led to marriage and family responsibilities. In addition the attraction of motor bikes, scooters and cars led to a rapid decline of interest and the Club ceased to operate in 1960. 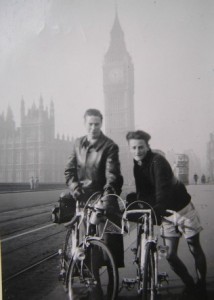 “All runs start from the Clifton Cinema, High Street, Evesham…”

The North Cotswold Cycling Club, which was active in the Vale during the 1930’s, was in some ways the forerunner of the Evesham Wheelers. Click here for Derek Parsons web history of the NCCC.

By 1965 Gordon Taylor and John Percival had started riding again whenever the constraints of family and work permitted. They were soon joined by Tony Newell, a young solicitor from London, and together they began the work of reforming the Club. Old members were contacted, new members recruited, race programmes and club rules drawn up, authorities contacted etc. Weekly social events were held at the (now rotting) Talbot Inn in Port Street.

Because a lot of the new members were in early middle age and married the long Sunday runs were shortened to more family friendly Sunday morning runs – with occasional all-day special runs. An annual early-season ‘training tour’ in Wales or the West Country was introduced; followed a couple of weeks later by a very hilly 50 (miles) in 4 (hours) or a 100 in 8 reliability trial. There were no carbon bikes and indexed gears until quite recently!

In the 1970’s ‘cultural exchange’ visits between residents of ‘twinned towns’ became a popular. Tony Newell joined an exploratory visit with the Evesham dignitaries to Dreux in France in 1977. The twinning was successful and from that date through to the early 1980’s Evesham Wheelers and Velo Club Dreux held reciprocal visits when an inter-club race always resulted in Evesham winning! Perhaps because of this terrible scar on France’s honour the visits were bought to an end when the presidency of Velo Club Dreux changed. 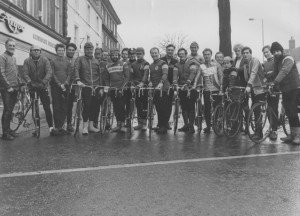 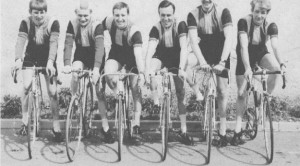 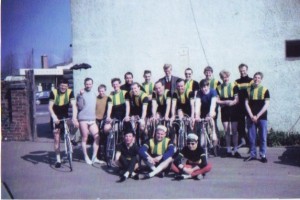 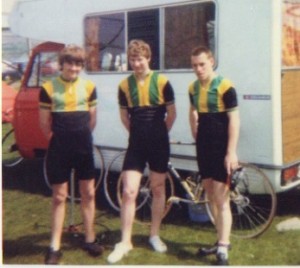 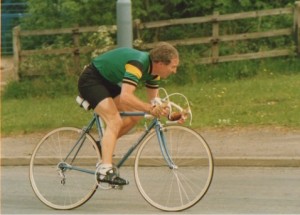 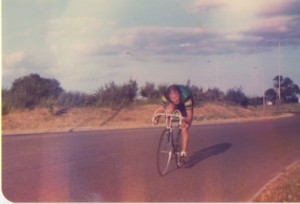 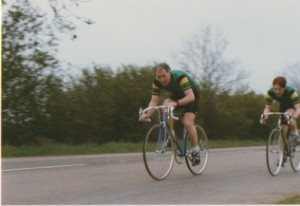 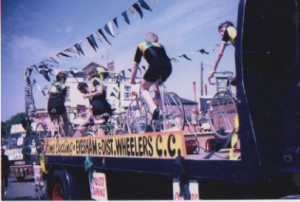 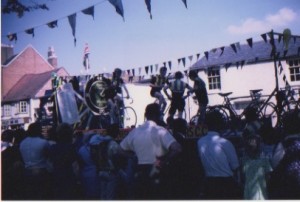 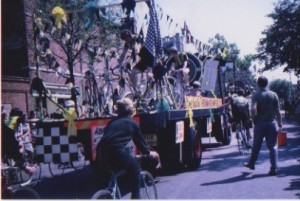 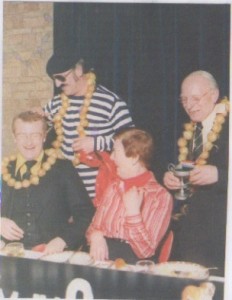 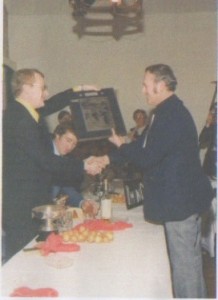 Over the years the Club’s junior riders and a few veterans took part, and still do take part, in road races at a variety of levels. Having managed to persuade the Police and Town Council to close off Swan Lane, Mill Bank, Bridge Street and part of the High Street each September through most of the 1980’s the Wheelers staged the Evesham Town Centre

The social side of the Club was very vibrant through until the 1990’s. There were weekly social evenings and each year the Annual Dinner and Prize Presentation was a major Club event. It grew to be one of the Midland’s premier social cycling events with guest speakers such as the Joop Zoetemelk – winner of the Tour de France in 1980, the Minister of Sport, David Duffield – the cycling commentator, and the Editor of Cycling Weekly. So big did these events become that the venues had to be larger and larger: culminating in Cheltenham Racecourse. Although the dress code was ‘formal’ (as was the style in the 70’s to mid 90’s) there was a great deal of fun and humour in the ‘cross-toasting’ which carried on throughout the evening. 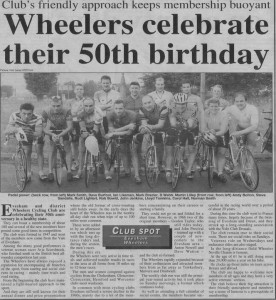 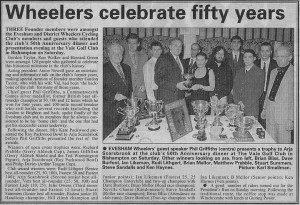 The Club celebrated its 60th Anniversary in 2007 with a dinner at the Vale Golf Club. Many of the early members attended. 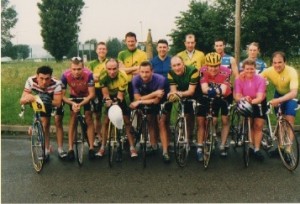